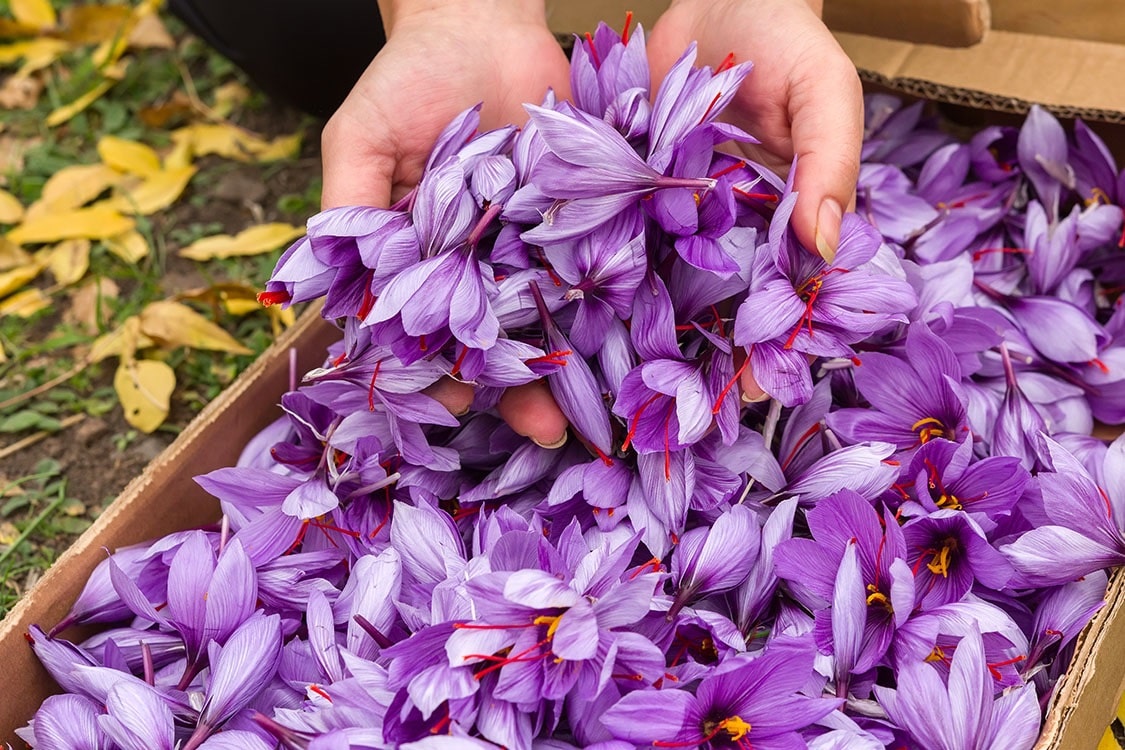 Saffron is a golden yellow spice with a strong and pleasant aroma, used in foods, beverages, and other products.

It originated in Asia in the 7th century, but now it is cultivated in Greece, Kashmir, Spain, and Iran.

Saffron is mainly dried and used to flavor and dye foods, but it has other benefits too.

As a labor-intensive harvested spice, it can also help with inflammation and it is wonderful for culinary reasons.

In this article, we have brought you 7 powerful health benefits of saffron.

Saffron, as a rich nutrient, contains antioxidants including crocetin, crocin, safranal, and kaempferol.

The red saffron color is because of crocetin and crocin, which are carotenoid pigments.

These compounds also act as an antidepressant, brain cells protector against progressive damage.

It also reduces the appetite, which helps to lose weight and improves inflammation.

The distinct taste and aroma of the saffron are for safranal.

Saffron flower petals contain kaempferol which reduces inflammation and also acts as both an anticancer and antidepressant. Saffron can boost your mood

Saffron is called “sunshine spice” not only for its distinct color but for it helps treat symptoms of depression by improving people’s mood.

The antioxidants in saffron fight against the cancer cells or suppress their growth by neutralizing the harmful free radicals that lead to chronic diseases.

While attacking the cancer cells, these compounds have no harm to the normal cells.

Saffron can help with PMS syndrome

Studies have shown that saffron can help treat PMS symptoms.

Premenstrual syndrome (PMS) refers to emotional, physical, and psychological symptoms that occur before the menstrual period.

Eating saffron reduces PMS symptoms such as headaches, cravings, pain, and irritability. Also, smelling saffron can lower the level of anxiety and stress in people.

Aphrodisiacs are supplements that boost the libido in people, especially in those taking antidepressants.

It also reduces women’s sex-related pain and increases lubrication and sexual desire for them.

Saffron can help suppress the appetite

Saffron may also curb the appetite, which leads to weight loss and reduction in total fat mass.

It is not clear yet how saffron curbs the appetite, but there is a theory that says since saffron elevates the mood, it reduces the desire to eat snacks during the day.

The antioxidants in saffron lower blood cholesterol and protect blood vessels and arteries against clogging. Saffron can help with Alzheimer

The antioxidant properties of saffron improve cognition in adults with Alzheimer’s disease.

Since saffron in small doses has an excellent taste and pleasant aroma and can be an ingredient of many different dishes, it can be easily added to the diet to take its nutrients for man purposes on a daily basis.

In order to extract saffron’s unique flavor, you can put the saffron threads in hot water.

Both the final liquid and the saffron threads can be added to the food or beverage in small doses.

Saffron is available in the form of threads or powder and even supplements.

However, it’s best to buy saffron in the form of original threads since they are less likely to be adulterated and also for better versatility.

Saffron price is the highest one among all the spices in the world. Still, a small amount of it takes a long time to be over since it is taken only in small doses like a pinch in recipes goes a long way.